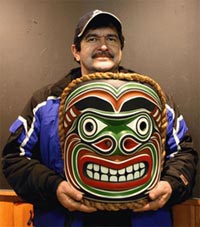 Born in Alert Bay B.C March 22,1958 Namgis first nation (Alert Bay) Also Kweeha Kwakiutl (Fort Rupert roots on his Grandmother's side) also of the Kwa-kwa-a-wak nation I became interested in native art in my early teens at Alert Bay. A beautiful painting of a thunderbird by Chief Henry Speck Sr. was displayed in the school hallway. It was that painting which inspired me to become an artist I have been working as an artist now for 28 years . It was back in the early seventies when Beau Dick came to our school to teach an art course that is when I began my training as an artist.

My influences include; Willie Seaweed, Charlie James, Mungo Martin, Bob Harris, Andy Beans, Doug Cranmer, Wayne Alfred and Beau Dick. I have apprenticed under Beau Dick and Wayne Alfred two very good friends of mine. My first love of the art involved making designs of killer whales Thunderbirds , sea monsters , and double headed sea serpents (sisiutls) I painted all these designs using a brush and India ink, Now I work with acrylics on paper , wood , and leather. I also carve cedar, alder and I design and carve leather belts.

I currently live and work out of Alert Bay B.C through my work I try to communicate a feeling of energy, electricity, and an illusion of movement. Some major works that I've been involved with: two projects in Canada Place at Expo 86, a forty foot totem pole in Stanley Park, numerous potlatches requiring dance, screens, masks, talking sticks, headdresses, and the overseeing and planning of a potlatch and our cultural dance performances in various locations for different occasions. My involvement in our culture is to me a most rewarding experience. I believe that artists Are very important parts of what keeps our culture alive and thriving in these ever changing times We are warriors in our own right because we are warriors of the art.