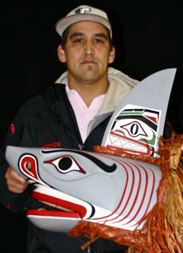 Marcus Alfred was born on September 14, 1981 in Alert Bay, an island community on the northern shore of Vancouver Island, British Columbia. He is the son of renowned artist, Wayne Alfred, and the grandson of Pat Alfred.

Like his father, Marcus was taught the ceremonial traditions of Kwakwaka’wakw people and from an early age he has participated in the ceremonies held at the Alert Bay Big House — the cultural center for the village. His father is among the premier ceremonial dancers and more recently has begun to share this responsibility with his son. Marcus has now danced many masks for various families who were performing their family crest masks at a Potlatch.

“Our living room was always one couch and a dance floor. I would practice dancing and Marcus would watch and follow the steps.” — Wayne Alfred Wayne was also always carving and by 1985, he was a full-time artist working on his own pieces as well as working with Beau Dick on large-scale commissions for Expo ‘86, held in Vancouver. Wayne moved to Vancouver for some years but returned to Alert Bay to accept a position as an instructor of Northwest Coast Art for the U’mista Cultural Centre.

There was recognition of the importance of carving towards keeping the younger generation culturally involved — and to stay resident in Alert Bay. One of his students was his son, Marcus. Marcus has proved to be a gifted painter and has assisted many of the more established artists such as Beau Dick, Don Svanvik, and his father with the painting of particular pieces. He is particularly in demand during the preparations for ceremonial events when many pieces are being created.

More and more he began to focus on his own work and now he is full time artist. His understanding of the dance and how masks are performed has greatly enhanced his ability to carve masks that are both functional and powerful. He continues to dance and has been called on to represent Northwest Coast art as an ambassador on the world stage.